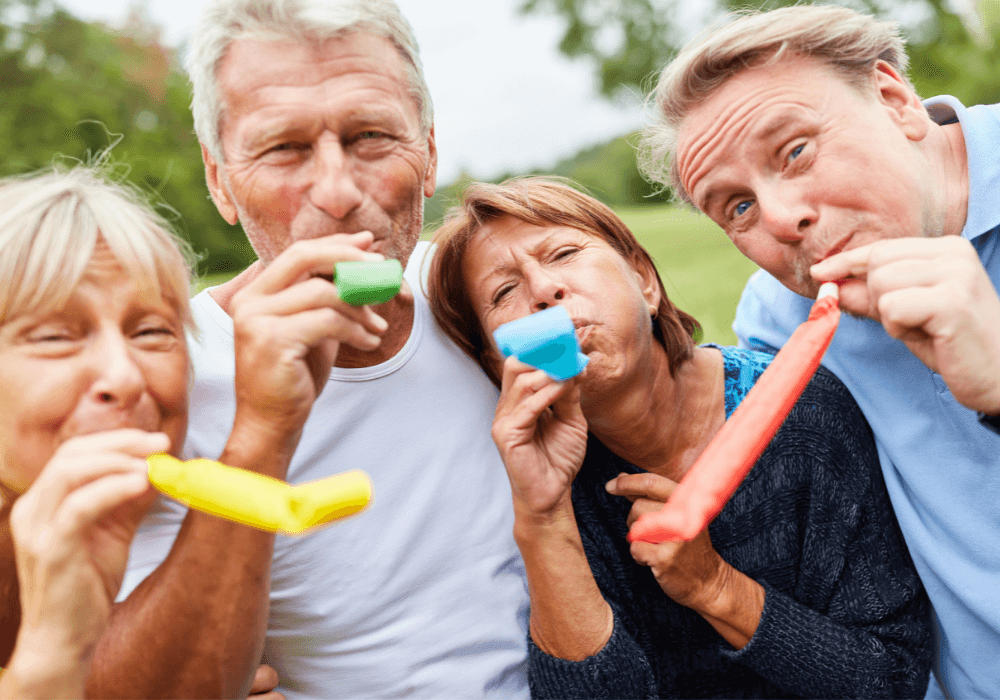 When someone you appreciate is about to retire, you naturally want to send them off with a great party that is happy, not sad.

Not just any party will do, but one that is just right for the occasion.

It can be hard to come up with fun ideas to make your coworker or friend feel really special, so it doesn’t hurt to get inspiration.

These retirement games will give the crowd things to do at a retirement party and make it memorable.

What Makes the Best Games for a Retirement Party?

You can’t go wrong with either of these retirement games ideas. They’re tried and tested as part of the fun things to do at a retirement party, and some are especially good for playing with friends, coworkers, and relatives of the retiree.

Although some require pairing people up, you can have as many or as few people play as possible.

One of the best retirement games, Name That Tune, is straightforward but challenging and funny. To play, you’ll need to make teams of two and have them standing across from each other.

Choose a song to play as loudly as possible for a short period, then stop it unexpectedly. Both teams must sing the part loudly while everyone else tries to guess the song. Some song ideas are:

This retirement game is perfect for friends and family. To play, each person must think of three statements about themselves, two that are true and one that they make up. Make sure they are equally believable.

Then, have everyone else guess which ones are true and which one is the lie. They have to guess between all three before the lie is finally revealed.

Have the retiree think about and write down the activities they have planned to do after retirement. Everyone else tries to guess one of the activities.

If they get one right, they get another guess. When they’re all done, the retiree reads out the list. Whoever has guessed the most plans wins.

You’ll need to pair up people two at a time to present to everyone else. To play, have one person be the actor. The other person has to think of an idea for the actor to act out and whisper it into the actor’s ear.

The actor then mimes the scene without using any words while everyone else tries to guess. A few examples could be:

Trivia questions make you think and challenge you on what you know or think you know. These retirement party questions are for when you want to play some head-wracking trivia.

You’ll need to divide everyone into two teams for this game. Before the party, you’ll ask around for facts about the retiree from family, friends, and coworkers, such as their company history, coworkers, and friends’ names.

Write each fact on a notecard, and during the game, have each person draw a notecard and try to ask the question the fact is answering.

6. This Is Your Life, Captioned

Create a PowerPoint or slide presentation with pictures of the retiree from their work or personal life. Have each person choose a photo to caption and share it with you. Attach captions to the photographs and then have the players, including the retiree, guess who wrote each caption.

This game makes the retiree the star. To play, give out pens and index cards to each guest. Have them write down a memory they shared with the retiree.

Put all index cards into a bowl for the guests to randomly choose one. Each person will then read their selected memory while the retiree tries to guess who the memory belongs to.

To get everyone talking, have each player ask the retiree “Is it true…” and ask a question they think the answer could be “yes” to. If they get an answer right, they get to ask another. Whoever asked the most “right” questions wins.

15 Hilarious Retirement Poems For The New Retiree In Your Life

Is Your Boss Retiring? 65 Retirement Messages To Say Goodbye With Style

You can’t always meet in person for a party, so you need virtual retirement party ideas. Even though you’ll be on Zoom, it doesn’t mean you can’t celebrate someone’s retirement.

9. Never Have I Ever

This game is challenging, funny, and an excellent way to better know each other. Each player holds up five fingers and makes a statement about something they have never done, beginning with, “Never have I ever…”

If anyone else has done it, they must put down a finger. Anyone who puts down all five fingers is out. Have the player take a drink of an adult beverage whenever they put down a finger to make it even more fun. Some examples of questions are:

Here is a game that gets people out of their seats, even at a distance. Make a list of items players should collect in their house.

Then share one item at a time, and set a timer for 30 seconds. The players must find the item within the time limit. Assign point values to each item so players can accumulate points.

You can make it more challenging by asking players to do something with the item, like take a selfie with it.

Each person will then share on-screen one at a time, with the winner of each sharing about the item. Some examples are:

The retiree’s version of Jeopardy can be just as fun as the tv game. To play, use the shared screen on Zoom or another similar virtual meeting platform.

There are dozens of different Jeopardy games you can find online or as apps that allow you to customize your own game. Some of the best include Jeopardy Labs, Jeopardy Arkadium, or the official Jeopardy game from the App Store or Google Play.

First, you’ll need to have a list of questions and answers about the retiree. During the Zoom meeting, divide people into groups for brainstorming within a Zoom breakout room.

When you ask each group a question, send them to their assigned breakout room to come up with the correct answer first. Alternately, if there aren’t many people, you can just ask each person a question.

Encourage some crazy answers (if they don’t know the real answer) to add to the fun and laughter.

Would You Rather: This game challenges each player to guess what they think the retiree would choose. Alternately, have each player choose, and the retiree guesses the answer they would select for each.

Happy Retirement Mad Libs: This variation on an old classic will leave the retiree with good wishes as a keepsake.

Who Knows the Retiree Best?: It’s perfect to play this when you have people with different levels of knowledge about the retiree or those who are all familiar with them.

When you want to have fun things to do at a retirement party, you need retirement games ideas to get everyone to participate and enjoy the occasion. Retirement games are a great way to show respect and humor while celebrating the retiree’s many contributions through the years.